Time is speeding by at an alarming pace. Tomorrow is Valentine’s Day and I’m still stuck in some other space-time continuum…like maybe around the first week of January.  Good grief.  I need for things to slow down.

I actually like winter just fine – granted I don’t live in Minnesota – but I like the turning inwards that the cold allows us to have if we so wish. I wonder if that is just a part of aging?

I’ve been able to do some buying so that when I am able to have some blocks of time to get out to my workshop, I can get busy making new things.  It won’t be soon enough!  Here are a few things that have come my way.

DId you all survive “Snowmageddon” in late January?  I ended up being home by myself – just me and the animals.  Some of Patrick’s blood tests were not going the way the doctors wanted (a combination of that pesky kidney still not totally settled into its new home plus some nasty side effects from the powerful anti-rejection meds).  So, on the Wednesday before the storm, they told us he would have to come back to the hospital at UVA for a couple of days.  They had hoped to get things straightened out before the storm hit  but that was not to happen.

I drove him up there late Wednesday afternoon and got back home about 9 that night. The storm rolled in Friday morning – and, boy, was it a doozy.  Here in Richmond, we got about 12 inches or so and when it drifted, it was even more.  I actually was not able to get my car out of our alley driveway until the following Tuesday.  Poor Patrick was stuck – they actually would have released him Saturday but there was no way on earth that anyone could get there to get him. Finally on Monday, when I once again could not get my car out, a friend was able to drive up to retrieve him.  It was a tough stay for him – he got awfully lonely and sad all by himself.  Because he tested positive for a CMV virus earlier, he was not allowed out of his room and anyone who entered had to mask and gown up.

For me, as long as we did not lose power or heat, I was doing ok.  I actually love the snow and I loved being able to sit inside and watch the winter wonderland unfolding out my windows.

This was the scene Friday afternoon as things were beginning to crank up.  How could anyone not think this is beautiful? 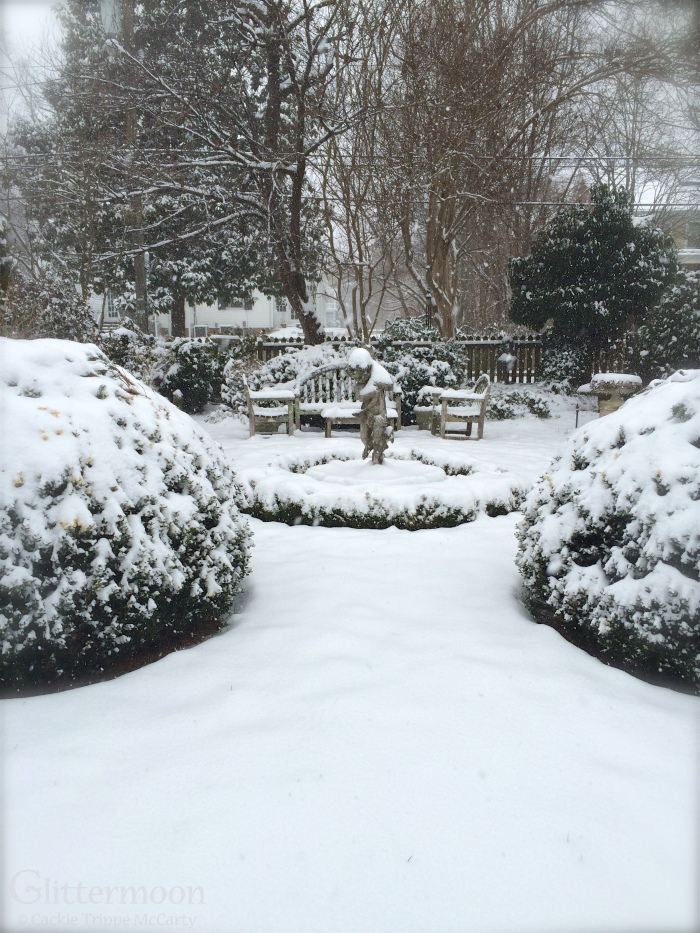 And exactly 24 hours later, this is how the same scene looked. 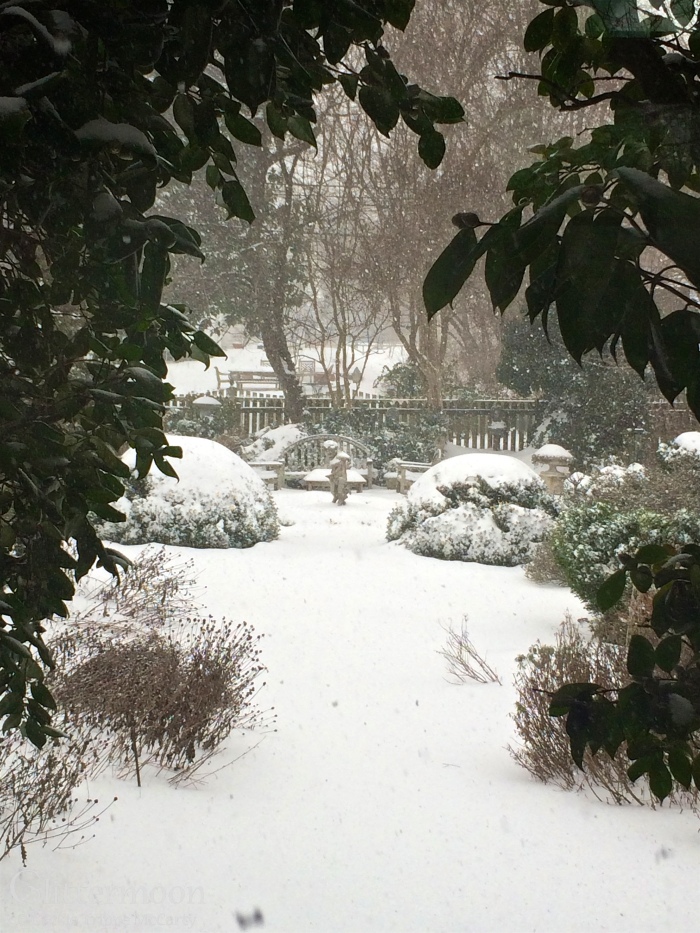 Saturday turned into a whiteout.  It was quite something to behold. 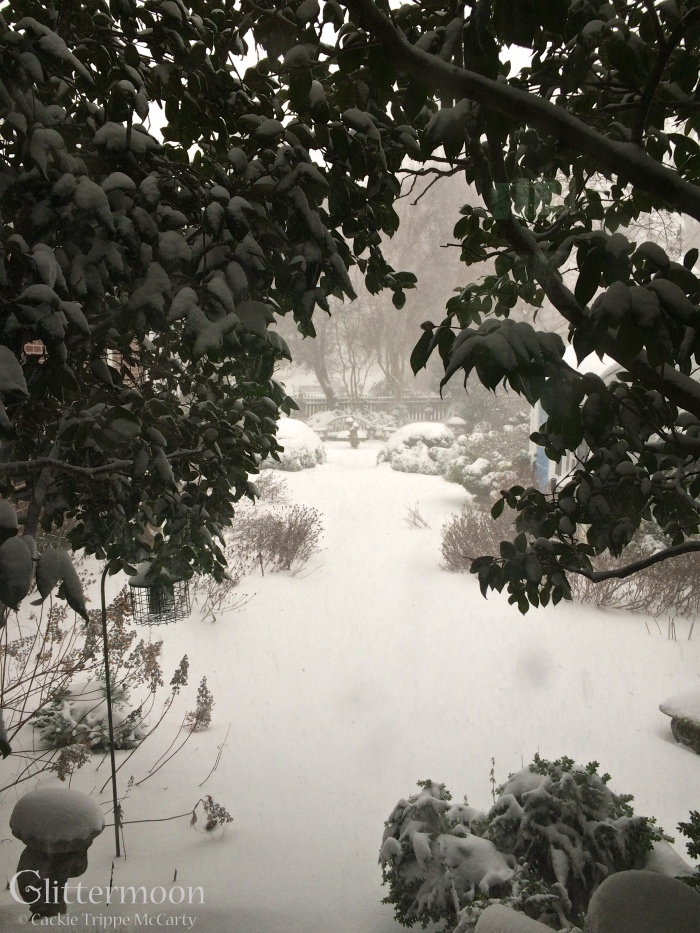 This is looking out to the front yard and across the street. 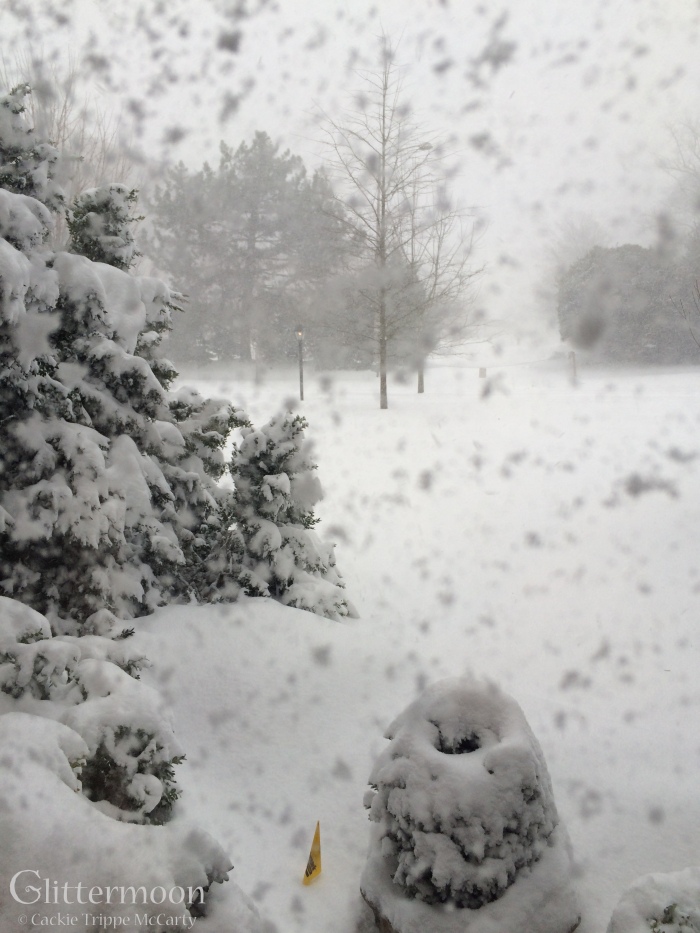 And just a little bit later, you could barely make out the trees in the front.  It made for an interesting impressionistic view. 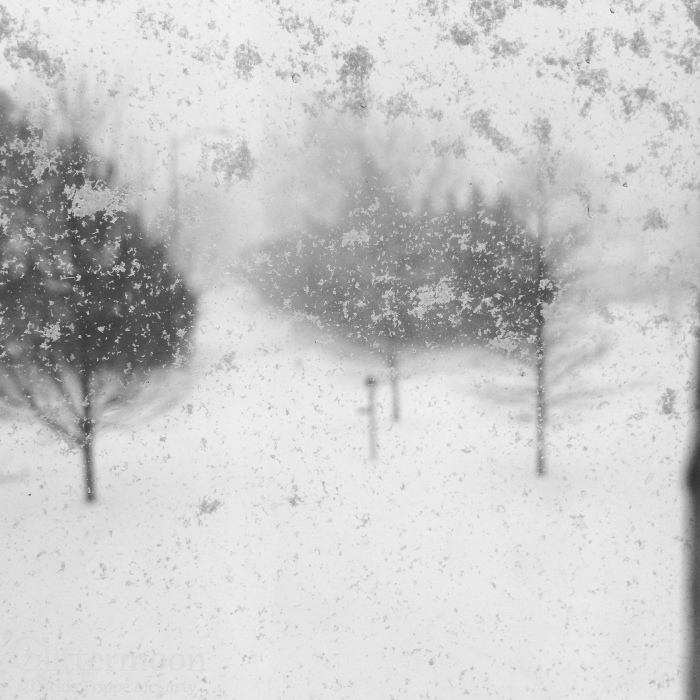 Looking out an upstairs window towards the playhouse and neighbors’ yards. 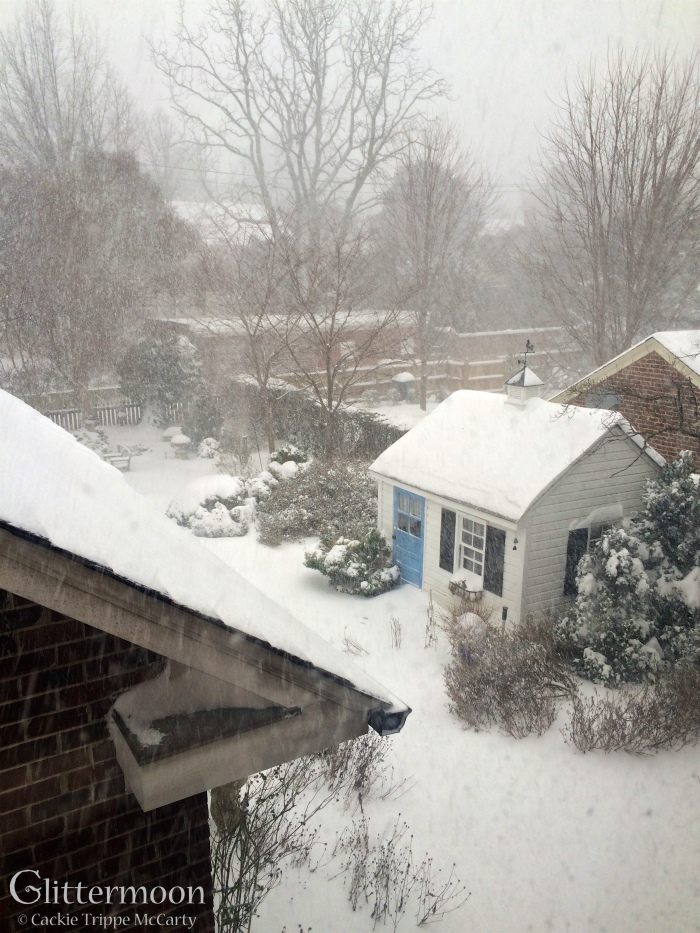 Emma P doesn’t mind going out in it and gamboling. Thank goodness,  But the snowballs she attracts all over her paws and legs the second she goes out are a real pain.  It takes forever to get them off. 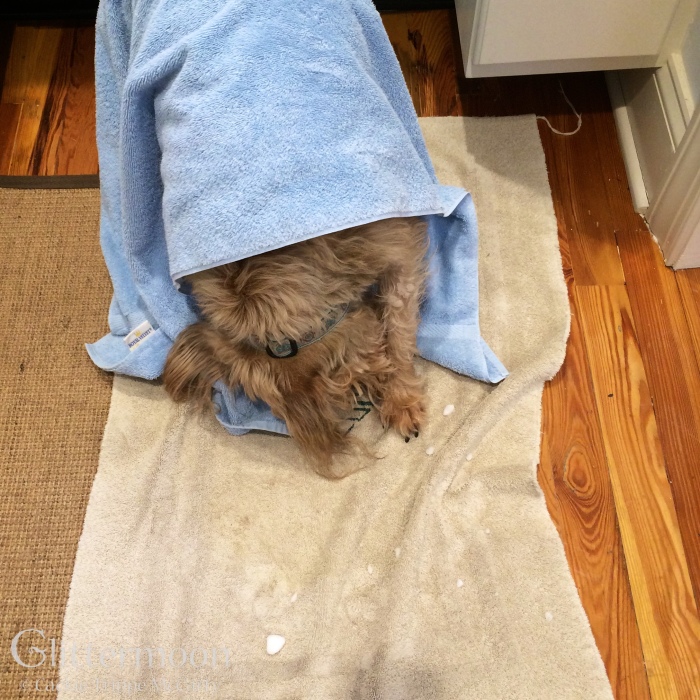 As night fell, the view continued to be beautiful.  Even Gabby liked it just fine. 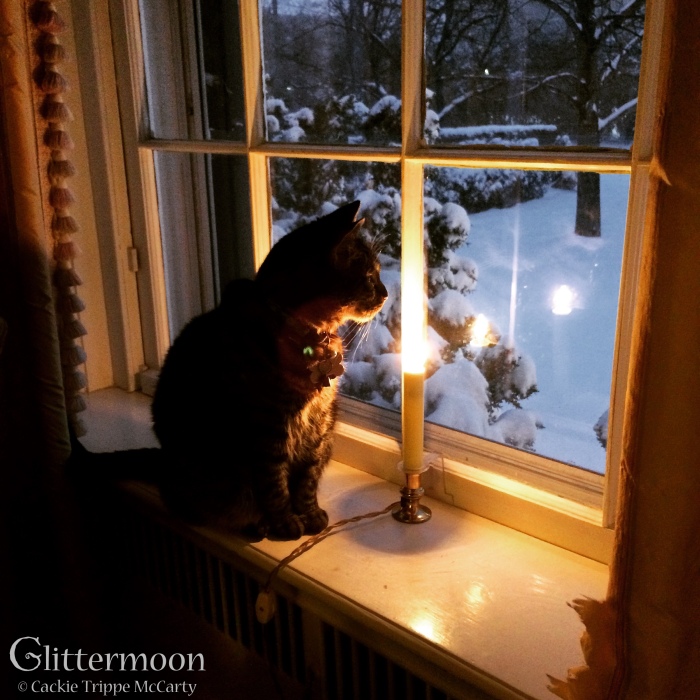 The Christmas lights were still up and our solitary reindeer proudly stood guard over the front door. 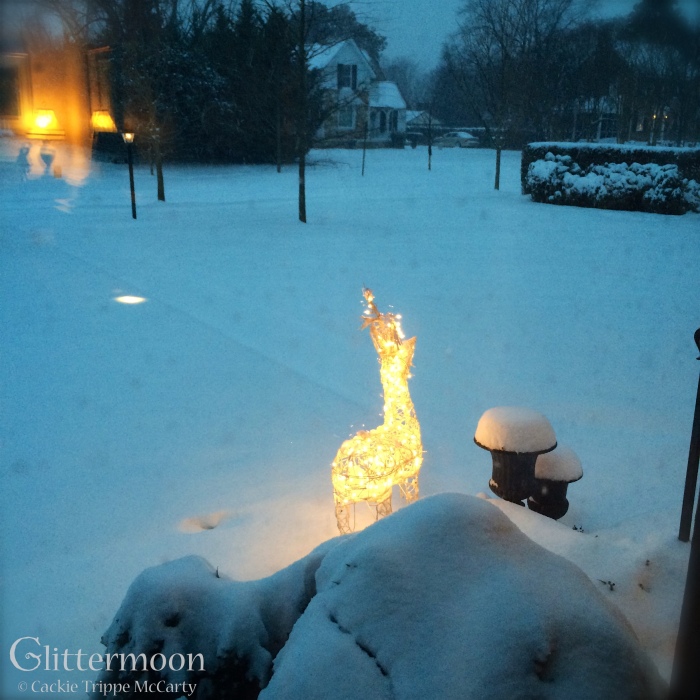 Unfortunately, once the sun came out on Sunday he was mortally wounded by an avalanche off the roof. 😟

This was the scene on the patio looking towards the door the Mister generally goes in and out of.  That’s a lot of snow!  Maybe it was a good thing he wasn’t home after all. 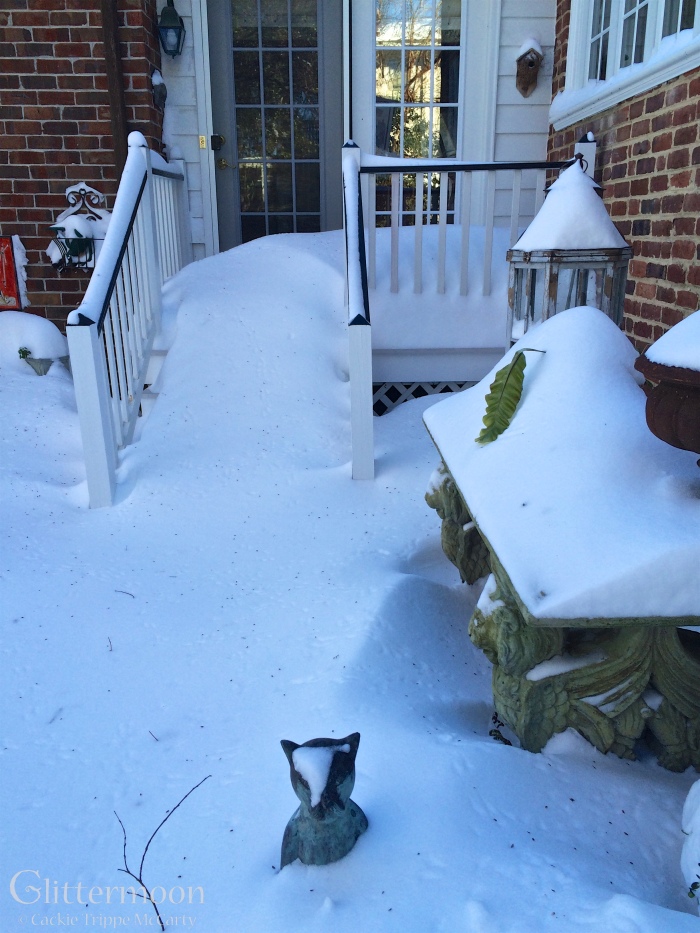 Sunday morning, Emma P And I went out to see what was going on in the ‘hood.  It was tough walking but, oh, so beautiful. 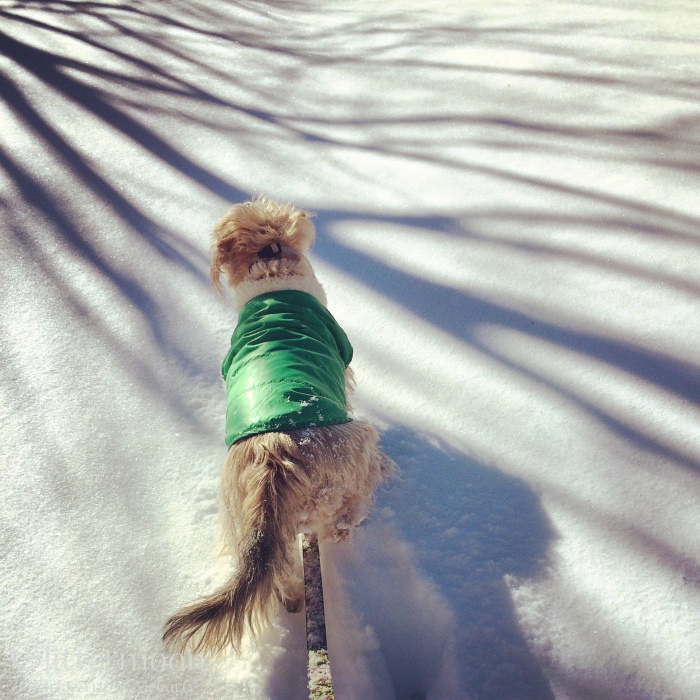 We are so blessed with our neighbors.  Our next door neighbor took it upon himself to shovel the front walk and sidewalk AND to make a path for me from the kitchen door to the alley where my car was. 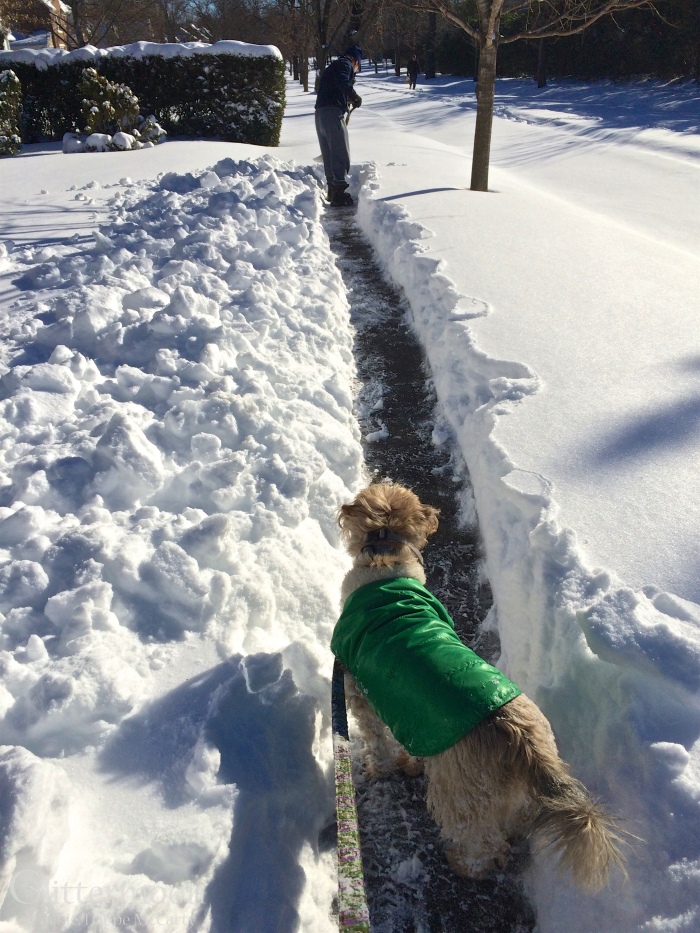 I tried to dig out the car but even my Swedish all-wheel drive was no match for the drifts in the alley.  I got stuck.  Until the garbage trucks or some other large vehicle came by, I was going nowhere.  But my back-door neighbors, who were away from home for the storm, got back Monday afternoon and their strong bunch of teenagers dug so much snow from around the car that it looked like an airport runway.  Dad drove their big SUV up and down the alley a few times and, voila!  I could get out.

What would we ever do without our neighbors?

But enough about snow.  It’s all gone now – even the mountains of dirty snow in all the parking lots.

The following Saturday, a friend and I made our way down to Petersburg to go antiquing.  I was hoping to find some Christmas treasures.  And though we had a fun time, we came home empty-handed.

If you are ever in Petersburg, VA be sure to have lunch in the Blue Willow Tea Room.  We had a lovely, leisurely time which fortified us to get back out on the hunt for treasure.

This chalkboard paint mural is on the side of a building on one of Petersburg’s main streets downtown.  It gave us pause for thought.  As I read what people had written, I was in turns heartened, saddened, taken aback, or delighted.  What do you want before you die? 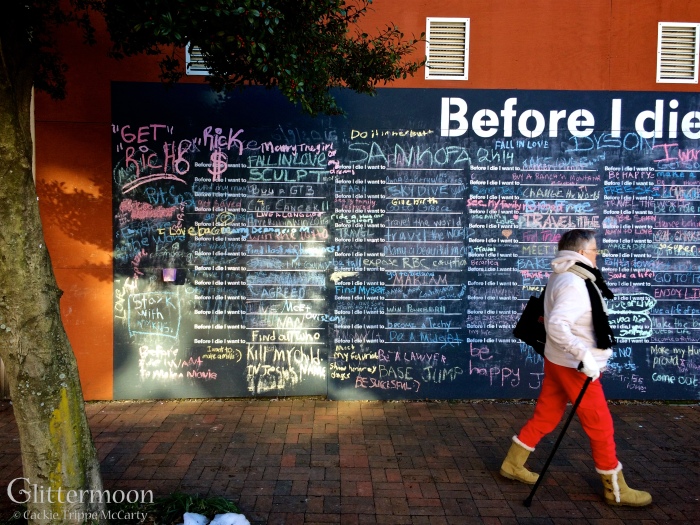 Sadly, we got to this place too late.  It is a rambling rabbit’s warren of stuff and I’ve found some terrific things there in the past.  Still, the window display was interesting.  I especially liked the “folks” in the upstairs windows. 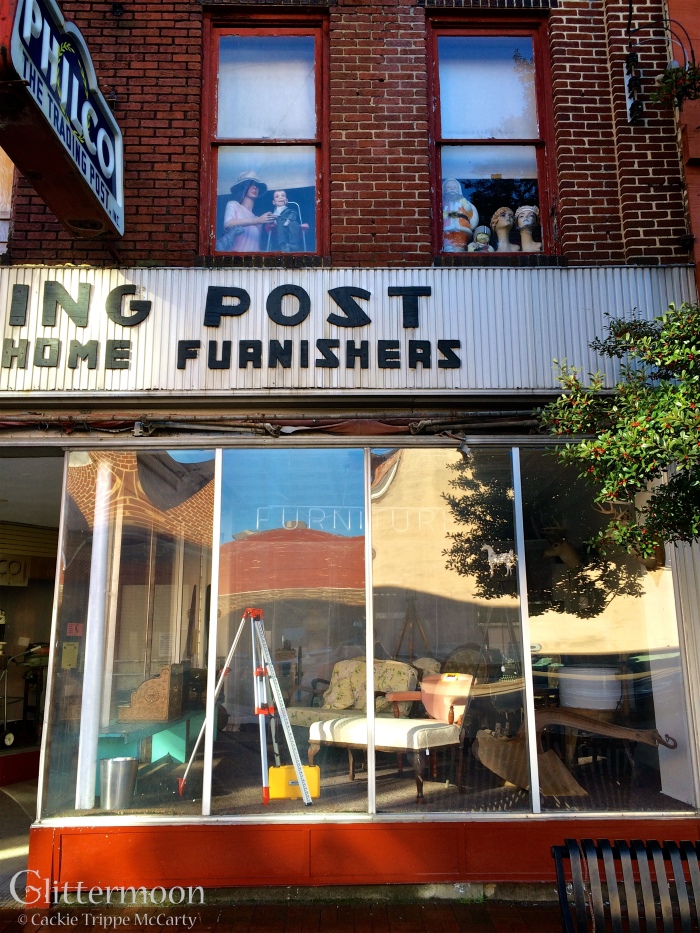 February 4th marked exactly 3 months since the transplant surgery.  I’m a superstitious soul and had not taken off the orange “Care Partners” bracelet they gave me at the hospital that day.  The bracelet is kind of like a pass to get into and out of the hospital and parking deck.  I finally reached the point where I felt comfortable taking it off so I asked Patrick to do the honors. 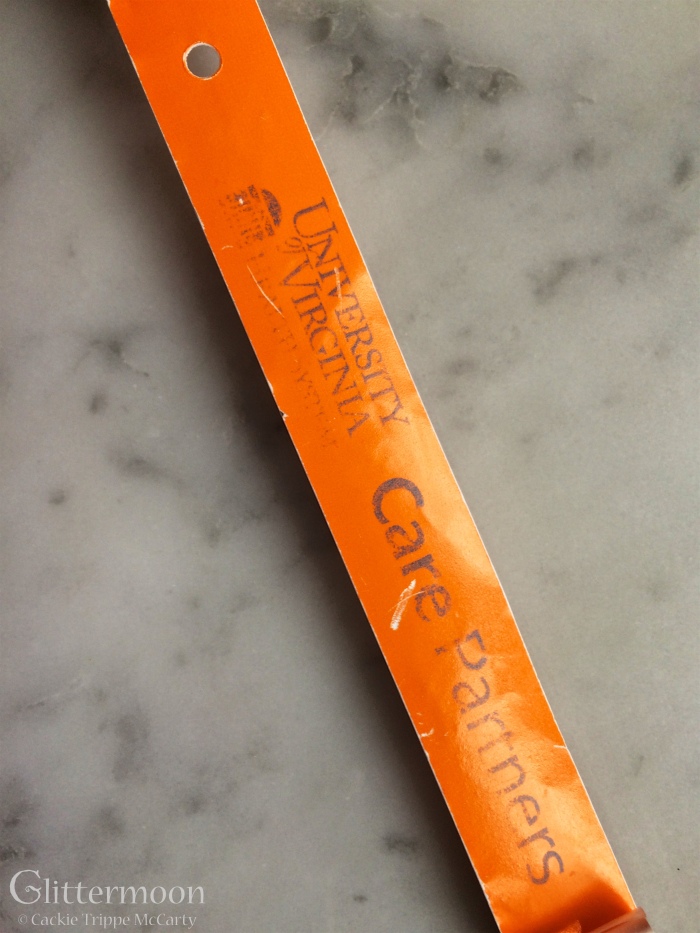 Perhaps we should have celebrated but I’m not anxious for the universe to think I am getting too cocky so I kept it on the down low.  Still, I feel like things are moving slowly but surely in a positive direction.  I think the pace is way too slow for him, though. That’s understandable – he has been through hell and back.

Last Sunday, I spent some time catching up on magazines and finally got to the Winter edition of one of my favorites, an obscure little gardening publication called Green Prints.  It’s a delight, a soul soother, and one of those small things that helps me to retain some faith in the goodness of the world around me.

As usual, there was something that was just right.  It is the italicized quote in the below photo.  It’s good to have a reminder of just what you need every now and then when you’re feeling down or worried about things.  It was really gray and gloomy outside but I felt so much better after reading this. 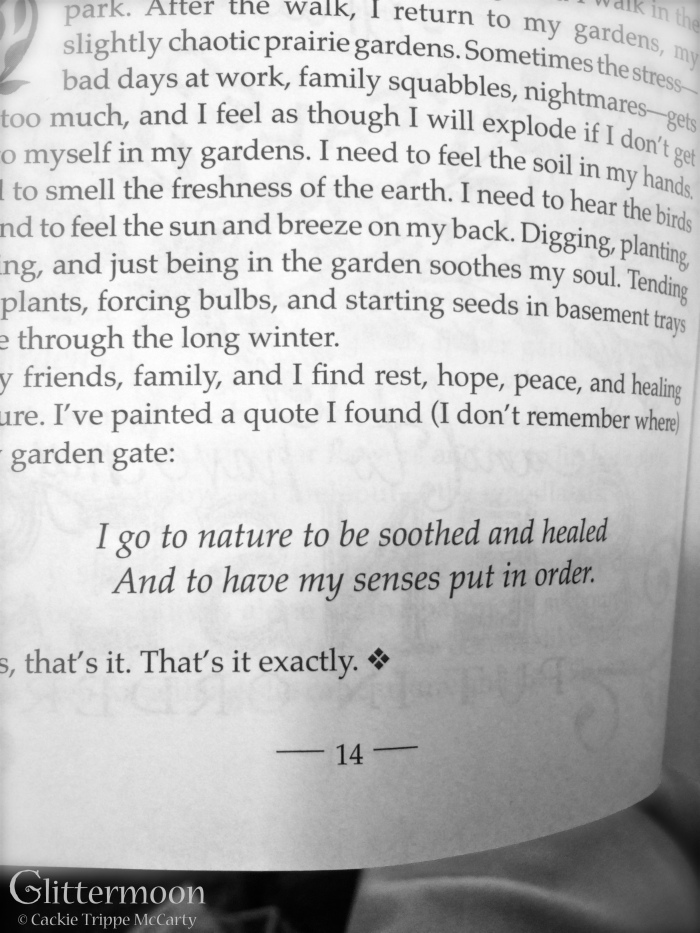 I think I am going to use this quote to make a new Glittermoon card.  What do you think?

Tomorrow is Valentine’s Day and I’m going to leave you with a photo of an early Valentine I received from Paddy.  He had someone take him to a local French bakery on Thursday.  It was really yummy! 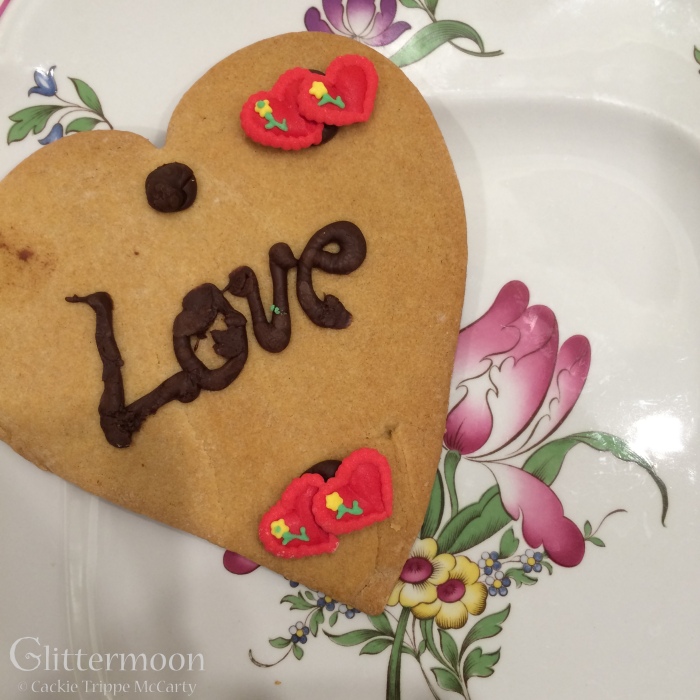 6 thoughts on “How Did It Get to be February Already?” 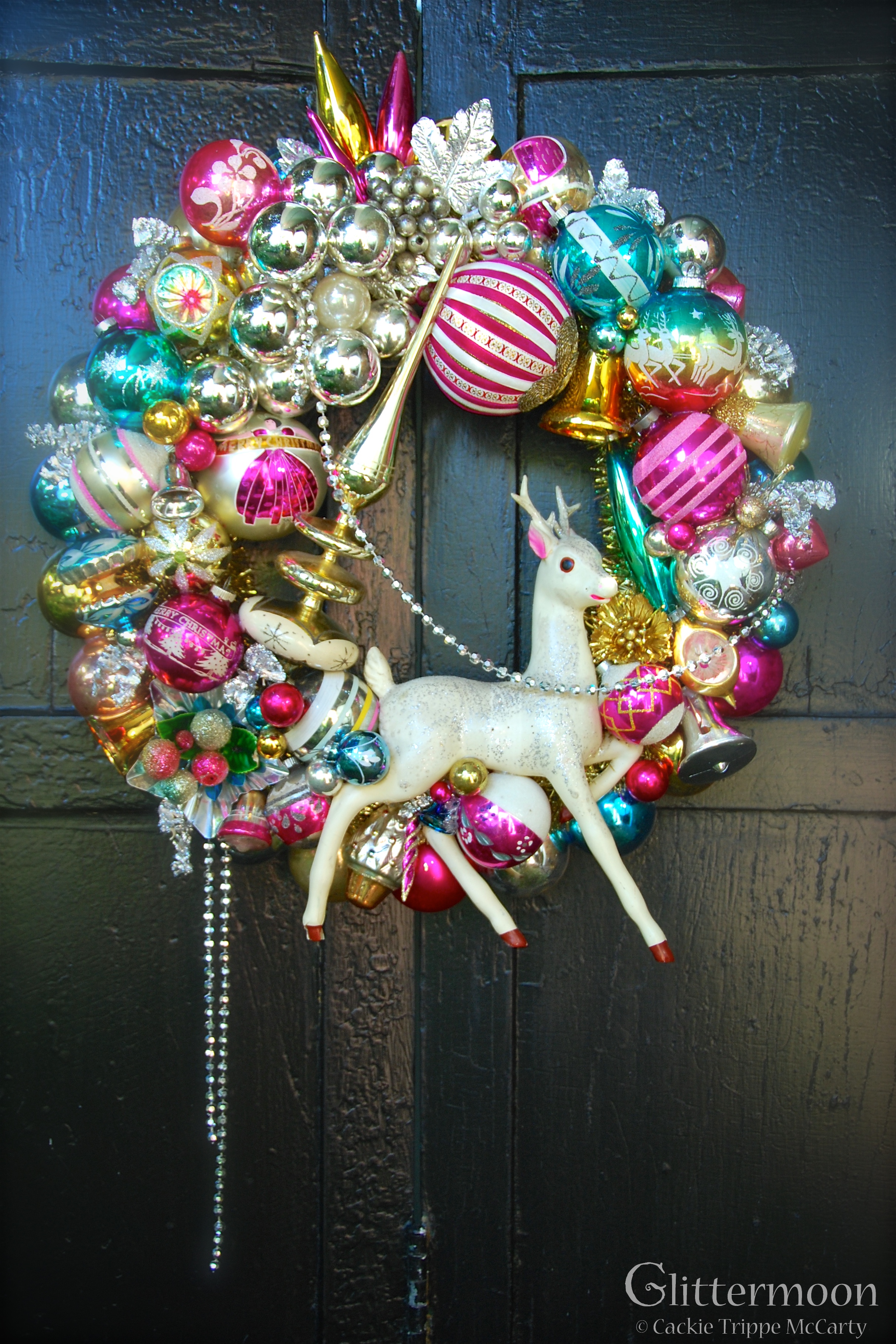 Love and Friendship. Is anything more important?
Flowers for your Monday.
R E P R I E V E…
I bought these gorgeous lilies on sale at the grocery store for $2.49 (!!!) this week. Having nowhere else to put them they ended up in my bathroom. Good heavens, what a spirit lifter. Why on earth have I never done this before?
I hope you are having a nice restful New Year’s Day like Bonny and I are. She’s more of a nap person than I; perhaps she’s onto something?
Snowdrops to welcome in the new year… 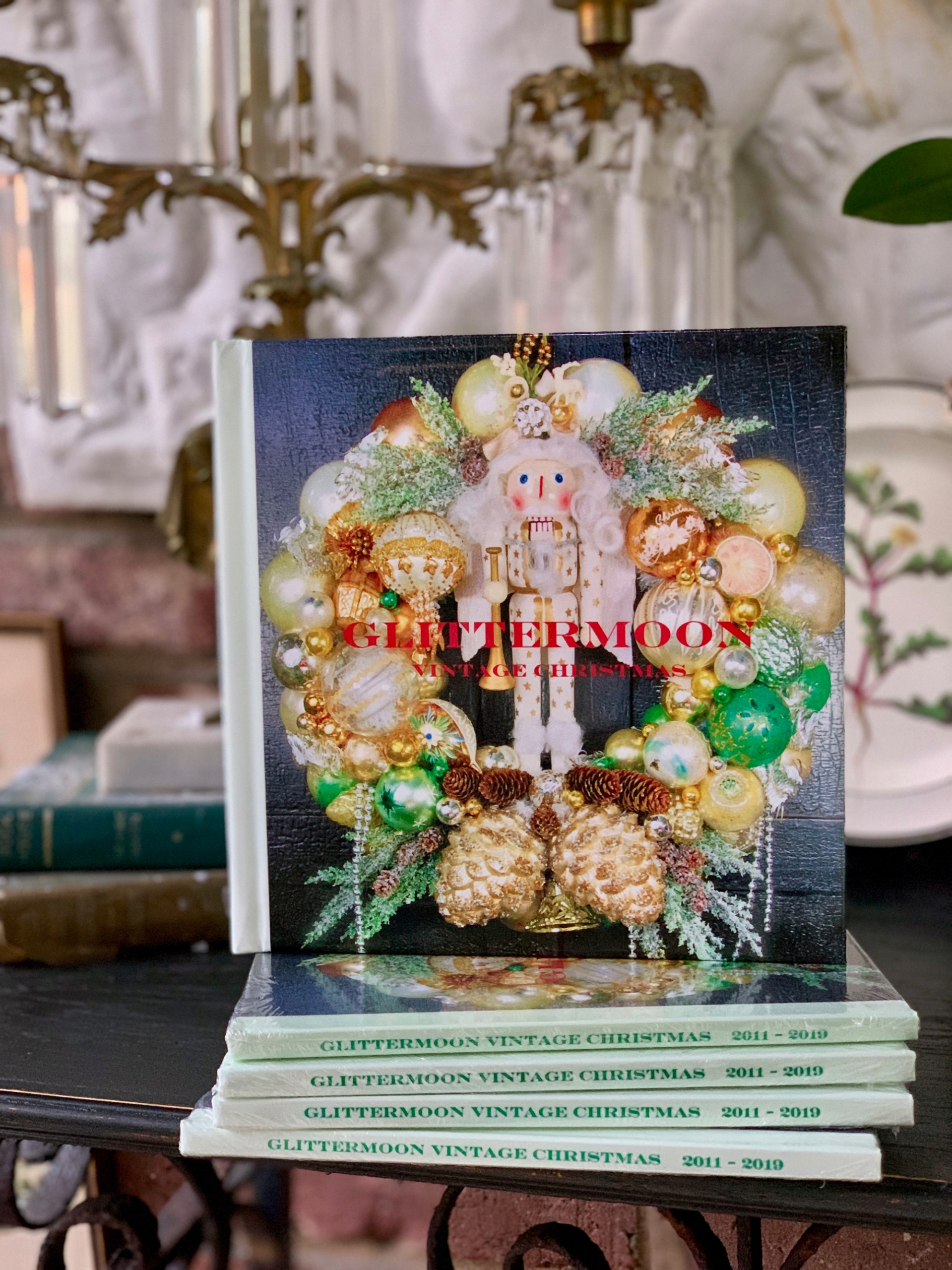 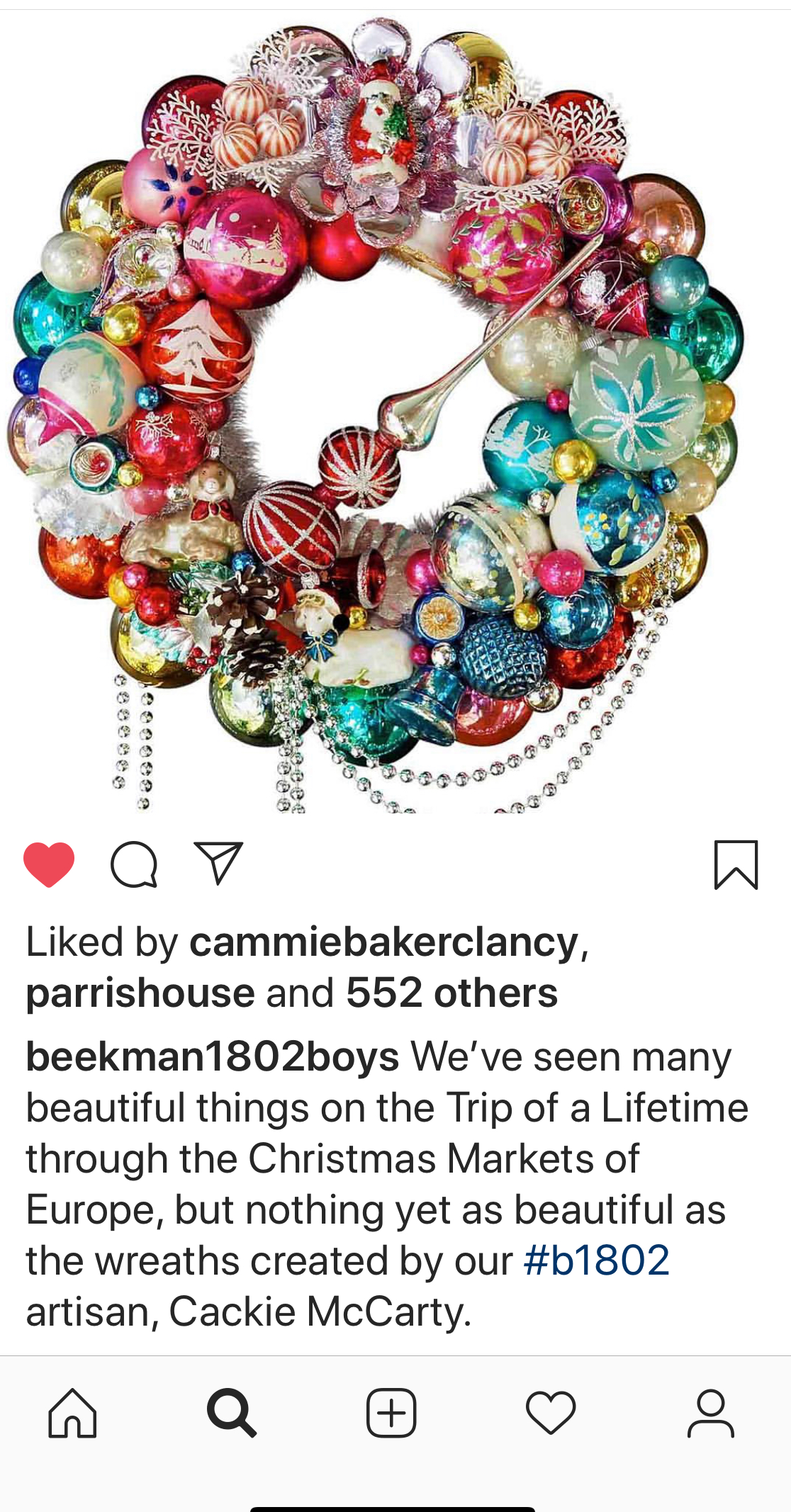